General
Fairplay
All participants of the Canyon Team Premiership are expected to behave in an appropriate and respectful manner towards other participants, spectators, streamers and the admins. The admin team reserves the right to make decisions which are not covered by the rules, to preserve spirit of fair competition and sportsmanship.

Team size
Every team should consist of at least 4 players and at most 6 players.

Rankings
If at the end of a competition stage two teams have the same amount of points, the head-to-head result will decide who gets the better position. If this is a draw, the overall mappoints of that match will determine the positions.

Access to matches
Access to the matches in this premiership is limited to the playing teams (this includes playing and non-playing members), the adminteam and official streamers. Streamers should contact the admin team well ahead in time to gain access to the servers and be allowed to broadcast the matches.

Use of custom models
The preference is that players use the default Canyon car model provided with the game. You can use models that are like the original Canyon car model, provided it's pointed in the correct direction, has the same dimensions, etc. The adminteam reserves the right to determine which model is allowed and which is not. The use of these different models can be distracting/annoying for players who drive with cars on and for spectators on streams.

Payment of prizes
Payment of the prizes linked to this competition will be done as soon as possible after the competition has finished. The owner of the team receiving a prize will be contacted to determine payment details (bankaccount / PayPal / etc.). That person is then responsible of providing individual players of the team with their share of the prize.

Qualification
The tournament starts with a qualification phase. All players can join the tournament server and drive on two maps. The times will be submitted to the tournament website, which will compile an overview of all times of the teams and display them ranked by the combined score of the two best players per team. The qualification will decide in which group the teams will be competing.
Qualifying has to be done with at least two players. If your team does not have two players with times on both maps, you will not qualify for the groupstage.

Groupstage
The groups will consist of a mixture of skill, determined by the qualification. There will be four groups of five teams and the teams qualify for a group by finishing in a certain position. For example: the team qualified first will go in Group A, qualified second in Group B, third in Group C, fourth in Group D, fifth in Group A, etc.

The groupstage will be in round robin mode, meaning that you will play every team in your group once.

Playoffs
All teams will be able to play in the playoffs, as there will be multiple levels of playoffs. The top two of every team will advance to the Champions Pool, the other teams will go through to the Open Pool and both these pools will be single elimination brackets. An example bracket with eight teams (Champions Pool) can be seen below, a similar system will be used in the Open Pool. 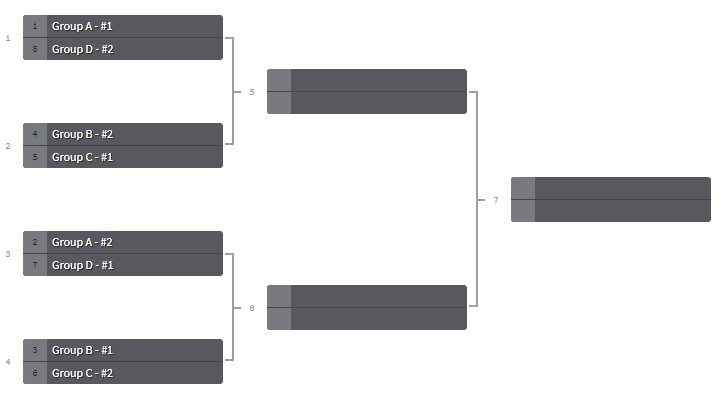 Working of a match
Confirming the date
The website gives you the option to confirm/alter the date of the match. The default date for the match is Sunday at 20:00 CE(S)T. Matches can be moved six hours back and two hours forward, giving you a range of 14:00 - 22:00 to start the match. Both teams have to confirm the match date on the website before the match becomes available on the servers. We suggest you contact the opponent using Discord, as the website does not provide a chat option.

Players
Players who finished the 1 vs. 1 submatch are not allowed to play in the 2 vs. 2 submatch.

Match points
Every submatch has a pointslimit (seven, five for the 2 vs. 2). When reaching the points limit, the team will be awarded the match points as listed on the match page (one point for winning the 1 vs. 1 or 2 vs. 2, two points for winning a 3 vs. 3 submatch). Submatches where tennis mode is enabled, require one team to win by two points (f.e. 7-5, 8-6, etc.).

Servers
All matches are to be played on servers provided by the tournament organizer. These servers run a plugin which will allow team admins/owners to determine which players play which submatches and will automatically submit the results of these submatches to the website. Playing the match on any other server is not allowed. As this is an experimental system, please take screenshots of the match results to be sure. If you have any trouble during the match, please tag Max in the #smurfs-canyon-league channel on Discord.